Semen from some of these bulls is available, please be in contact for details.

Traditional NZ Angus hill country type with proven industry leading fertility and longevity. He has sired over 350 outstanding progeny which are always highly sought after. His daughters are the top breeding females at Meadowslea, and are proving exceptionally fertile and productive in our hill country, resulting in him now being a breed trait leader for short days to calving at -10 days. He is recognized as a major senior sire within the Angus breed and has progeny in 16 Stud herds in NZ and Australia. This year his descendants included some of the highest priced bulls in both the Turiroa and Rangatira bull sale catalogues.  He is now rising 11 years old, still sound as a bell, and has successfully mated his full quota of cows again this year.

Deep, thick, easy-doing sire with exceptional production figures for hill country. He ranks in the top 10% of the breed for the important maternal and fertility traits of low birth weight, calving ease, short gestation, scrotal size and rib and rump fat. He is a trait leader for milk, and short days-to-calving at -8.4 days. He has recently been evaluated in the BLNZ progeny test where his off-spring performed strongly for both growth and carcass traits . He was also evaluated in the BLNZ Dairy progeny test where he ranked 3rd for short gestation. His daughters are outstanding in the herd, weaning thumping calves, while maintaining their condition all year round.

This is the bull we have named “Meat Machine”.  We have now had over 150 of his progeny and he is having a huge impact in the herd. He leaves terrific thickness and depth with great hindquarters, and that easy-doing ability we value so strongly showing with his exceptional rib and rump fats which are in the top 1% for the breed.  He is a trait leader for calving ease at +10.5 and has exceptional low birthweight, with good scrotal size and short days-to-calving. We believe he is the true Angus hill-country type and we can't get enough of this bloodline. 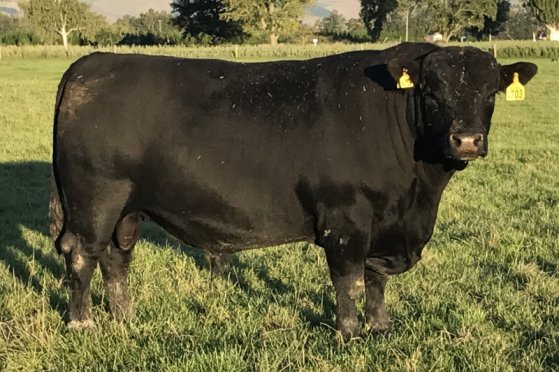 This son of G914 is out of a top Turihaua Crump heifer so is bred to be thick as a brick. He has maternal and fertility traits that are exceptional, with calving ease, low birthweight, scrotal size, and short days-to-calving all in the top 10 % for the breed. Meanwhile his rib and rump fat EBVs are off the scale. His progeny have  scanned so well his EMA has jumped from +2 to +6.7  and this has pushed his self-replacing index to $131 – recognizing the importance of these strong maternal and fertility traits to a commercial beef operation. We believe any high country farmer - and his bank manager - would love to have a herd of cows with the do-ability and moderate size of this bloodline. This year in our 2020 bull sale a grandson sold at lot 1 sold for $35,500. 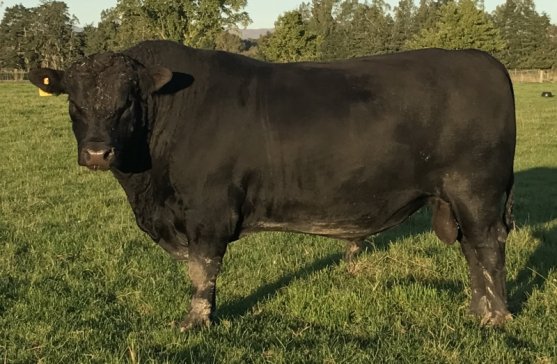 Retained in the stud in 2016, he is a top Turihaua Crump son, out of a cow by our legendary old herd sire Meadowslea 70 (who is the grand-sire of F540). A deep, thick, easy-doing bull with strong scrotal and fat EBVs in the top 10% of the breed. Last year his first crop of progeny were a real feature of the 2019 bull sale catalogue and continue on the legacy of Crump - producing thick moderate fertile cattle to perform in the hill country. K811 sons exhibit the same thickness with the top hindquarter that the Crump bloodline is known for and have strong coats ideal for the harsher climate.

Purchased in 2016, he was selected for his volume and capacity with an outstanding hindquarter, and his progeny strongly reflect this. In 2019 we  sold the first of his sons as 2-year-olds, and they were a real feature of the offering including the top-equal price of $22,000. This year his sons sold to $18,500 and again featured the strong hindquarter with the Braveheart influence in his pedigree.  He is leaving plenty of growth in his progeny with strong rib and rump fats and good IMF.

We retained this bull in the stud in 2016. His sire is Meadowslea J514, an F540 son sold for stud to Earnscleugh Station for $17,000 in 2015 where he is breeding consistently well. L226 is out of a top young Turihaua Crump heifer who also produced M452, sold in 2018 bull sale to Peak Hill Station at $17,000 with a share retained at Meadowslea. L226 has strong fertility and maternal traits with calving ease, short gestation and low birthweight. His scrotal size and short days to calving are in the top 10% for the breed. The first of his sons sold in the 2019 bull sale to Umbrella Range Angus for top equal price at $22,000. This year his sons were the feature of the 2020 bull sale catalogue with 5 sons averaging over $15,500 and another retained for stud duties.

Purchased at the Beef Expo in 2017, this bull had impressed many at the bull evaluation unit with his structural soundness, good feet and strong hind-quarter. He is out of a top Turihaua cow from their embryo transplant programme, who also bred stud bulls sold in the 2018 Turihaua bull sale to Oregon Angus and Alpine Angus. His first crop of sons were sold in our 2020 sale and exhibited strong hind-quarters with very good coats and feature moderate birth and mature cow weight. 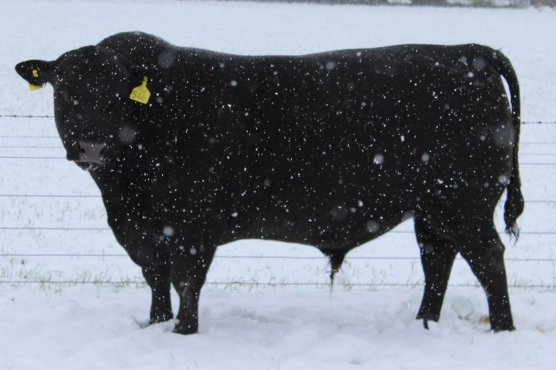 Retained in the stud in 2018, M564 is a son of F540 and out of a great cow by Glanworth 08-16. We selected him to use as a yearling after he had scanned with the biggest EMA ever recorded in the stud. He has wonderful fertility and maternal traits with calving ease and moderate birth weight, followed by very good growth and scrotal size. His milk, days-to-calving and rib and rump fat are all in the top 10% for the breed. A moderate-framed, easy-doing type with a terrific spread of figures for hill-country. He has many outstanding yearlings that look likely to be a real feature of our upcoming sales in the next year. 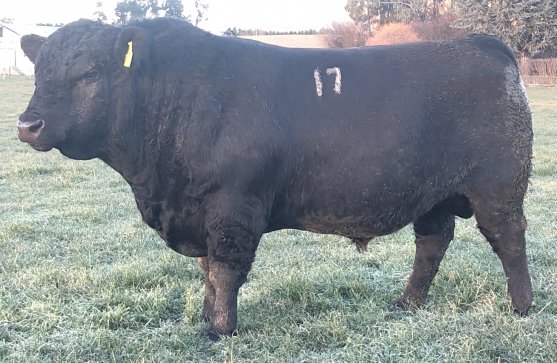 This bull was purchased at the Woodbank sale in 2018 for the top price of $32,000. He was selected for his exceptional depth and thickness and easy doing ability. He has tremendous spring of rib, great depth of flank and a powerful hindquarter. He has a nice balance of figures for hill country with calving ease and moderate birth, followed by good growth, but still with a moderate cow weight. His key fertility traits of strong scrotal size, and both rib and rump fats are another reason we rate this bull so highly and eagerly await the first of his progeny hitting the ground this spring.

We retained this sire in 2019 and rate him as possibly the best Turihaua Crump son ever! He is out of a top-performing Glanworth 0816 cow who also bred our top price bull in 2018 - M429, sold to Red Oak Stud for $18,000. She has bred other top sons sold at $13,500,  $10,000 and $9,000. N166 was used in the stud as a yearling and his first crop of calves weaned with exceptional weights, and his sons are without a doubt  the pick of the yearling bulls at this time. We really rate this bull, and with his proven pedigree, expect he will have a major influence in the stud.

This is our top keeper bull for 2020. A son of the well-known Taimate Lazarus who is renowned for maternal and fertility traits, and out of another top performing Glanworth 0816 cow - meaning P565 doubles up on these important attributes. He has good calving ease with moderate birthweight followed by strong growth. His scrotal size ranks in the top 10% for the breed and his short days-to-calving is in the top 20%. P565 was the outstanding yearling bull of his year with tremendous depth of body, terrific balance and style, and beautifully sound. We used him to mate yearling stud heifers for 2 cycles together with his half brother P556, who was sold in our June sale to Helmsdale Angus for $18,000.

This is our new stud sire purchased at the record breaking Turiroa bull sale in 2020 for $17,500.  We have named him Turiroa Panther because we were so attracted to his cat-like fluid movement and beautiful balance. He has the tremendous depth of body, strong deep hindquarter, and easy doing attributes that we value so highly in the hill country. His pedigree is rock-solid: he is by the $40,000 Goldwyn Napoleon who has bred so strongly in studs right throughout NZ. His dam is by our own Turihaua Crump and is in the ET programme at Turiroa, and is herself is a flush sister to Turiroa Maverick, who bred the top priced bulls at Rangatira in 2020. The grandam is also a top breeding donor cow who produced the stud sires Turiroa Blackheart and Turiroa Breaker.

We purchased this bull in 2010 after he had been used as a yearling at Glanworth Stud. 08-16 has proved to be hugely influential in our herd and he has added tremendous fertility and maternal traits proven by the fact that his EBVs for these traits are exceptional for a 2008 born bull. 08-16 shows up in the pedigree of many of our good cattle and his daughters are the moderate-framed, easy-doing types that thrive in the hill-country. We recommend this bull to anyone looking to build a strong female base and he is ideal for mating heifers and keeping the progeny to suit a hill country breeding programme.